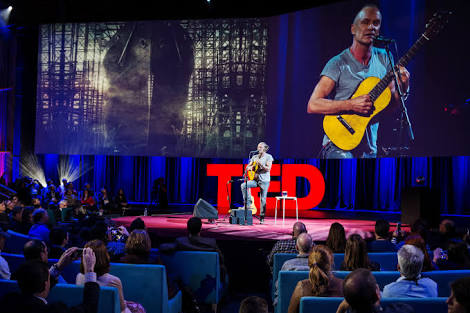 Well, he once rhymed “cough” with “Nabakov” and poetically asked, “Hey Mr Brontosaurus, have you got a lesson for us?” And now Sting has unknowingly inspired my latest writing project.

The inspiration came via this TED Talk and interview he did in 2014 about how he overcame writer’s block. What was Sting’s answer to his affliction? He realised that he was getting in the way of his work – that there was too much of him and that he needed to step aside and let others speak. How he did that is his story to tell, and you should let him tell it – the TED talk is a compelling listen. But in short he started tapping into the stories of the community that he grew up in, the community he’d been so eager to put aside when he discovered his own artistic potential.

I guess it’s fairly common for a writer to be full of themselves. I don’t want to be. What struck me about Sting’s story was the realisation that it could so easily be true of me. And so, while on holiday with my wife in southern Queensland where I spent ten of my earliest years, I conceived of this new project: My Family and Other Landscapes, a tribute to the places and people that formed me. I can’t guarantee that I, like Sting, won’t get in the way of my work doing its job. But I hope I can honour a few other people and places on the way. I hope you can join me as I post some of the poems I write and start announcing soon ways that you can be involved.

Teacher, writer, blogger, husband, father, Christian. Living in Wyndham in Melbourne's west, on the land of the Kulin Nation. Searching for words to console and feed hearts and souls. View more posts

2 thoughts on “My childhood with Sting”