Wanting to keep things neat and tidy is not OCD. Straightening crooked pictures is not OCD. Demarcating your work-space clearly is not OCD. All of these things might point to OCD but they could just as likely not. Having invasive, repeated and unwanted thoughts that drive you to perform compulsions in an attempt to control them – THAT is OCD.

It was a small town in South Australia near the Murray River. My wife and in-laws were still in the coffee shop finishing their lunch and I needed to pick up some medication before we left town; I would need it by the morning, and there was a chance that there would be no pharmacy wherever we were going that night. So I left my family in the shop and wandered down the street to where I had seen a small pharmacist.

There was a trainee at the counter. He seemed warm and friendly and had been a local boy before moving to the city to study. He greeted the other customers like old friends or long-forgotten neighbours. I was the odd one out for sure, but he didn’t let it show. He was friendly enough and, once he had fetched my medication, he was careful – painstaking even – in how he wrapped up the packet inside the white paper bag he gave me. I must have looked at him in a way that made him feel scrutinised, because he smiled and said, “Yeah, I’m just a bit OCD about that.”

My first response was just to smile, pay, and leave with my medication. And as I walked from the shop I didn’t feel anything in particular. It’s a normal remark. It annoys me, but I’m used to it. I hear it all the time and, while you might hear it too and not really notice, I do because, you see, I have OCD. That was why I was getting the medication: an SSRI commonly prescribed to treat the condition. The same medication can be used for any of the related anxiety or depressive disorders; often OCD goes along with generalised anxiety disorder and/or depression, as it does in my case. Yet a training pharmacist should be expected to know that an SSRI may well be treating OCD or at least a number of closely related disorders. It was a thoughtless remark at best. At worst, it could have been deeply harmful. As I left I wondered if I should have said something. There was such a high chance that his remark would be highly pointed for me, and, while I have learnt to ignore comments like his, others may not know how to or even think that ignoring it is right. In the end it was too late to do anything. All I can do is hope and pray that he learns not to say such things.

But ever since then I have been thinking more and more about the remark, thinking about my own tendency towards brushing it off as “just something that people say”, and about the ways that such off-hand remarks can actually cause significant pain and distress to many. I’ve been thinking too about how few parallels there are, how few other serious conditions we have turned into idioms to describe our own eccentricities. Our society has generally moved away from calling things “schizo” or “retarded”. We might often say that we are “depressed” when we just feel temporarily bad, and some are inclined to declare themselves “suicidal” when that is a very long way from the truth. Yet there seems to be something highly pervasive about the phrase “just a bit OCD”, and not only does it diminish the pain of those who truly are more than a bit OCD, but it also shows a complete misunderstanding of what the condition entails. Wanting to keep things neat and tidy is not OCD. Straightening crooked pictures is not OCD. Demarcating your work-space clearly is not OCD. All of these things might point to OCD but they could just as likely not. Having invasive, repeated and unwanted thoughts that drive you to perform compulsions in an attempt to control them – THAT is OCD. And it is close to nothing like what the general public thinks.

When I was a child some of my family and friends would joke about me being “OCD”. I bought into the joke, not knowing how unhelpful it was. You see, I liked everything to be neat, and I was quite extreme in this. I once asked my brother if he had borrowed a certain CD, on the grounds that the disc was aligned differently in the case to how I would have done it. I also went through a stage of being almost obsessive in keeping my hair neat. These were, perhaps, signs of compulsions. The neatness, I’m inclined to think wasn’t, because in the end I could largely do without it. The hair was more likely a sign. But the thing that made it a sign wasn’t that I wanted neat hair. It was that there was a student in my class who was teased because his hair made an egg-shape on his head and, fearing anything that might give more reason for me to be bullied, I did everything I could to avoid such ridicule of my own hair.

The biggest signs of OCD, however, were entirely internal. When my head would be assaulted with a barrage of obscenities that were completely at odds with my quiet, Christian, demeanour, and I learnt to combat them by silently tapping out rhythms on my fingers or keeping a steady, circling version of the Lord’s Prayer or something along those lines in my head: that was OCD. Not just a bit OCD, profoundly OCD.

And it wasn’t until, at age 28, that a psychiatrist thought to ask me about THOSE thought patterns, not just why I was sad and stressed all the time, that my OCD was identified. Not because I liked things to be a certain way but because my head was filled with assaulting thoughts and I only knew how to keep them at bay through old (and increasingly ineffective) patterns that I had learnt as a child.

The word “obsession” actually comes from the Latin word for an army assault. That’s what an obsessive thought is like. Picture an army with a battering ram attacking a castle. And then picture the knights indoors trying to combat the battering ram by tapping out their own frantic rhythm to keep themselves from hearing the assaults outside. When that describes your mental state, and the habits you learn to combat it, that is OCD.

No-one ever describes a sore pimple or bump on your head as “a bit cancerous”. We’ve learnt not to call things “spastic”, and we’re moving away from “gay” and “psycho”. But, when we like things to be neat, we have no qualms calling that “a bit OCD”. Please, please – just don’t. If you don’t want to trivialise the agonising pain of a condition you barely understand, then find another phrase. Say you’re neat. Say you’re fussy. But don’t say you’re “a bit OCD”, because the chances are that you aren’t, and if you are (and you have all my sympathy and compassion if this is the case) then the problem is going to be much bigger than your neatness and deserves more respect than you or our society are giving it. 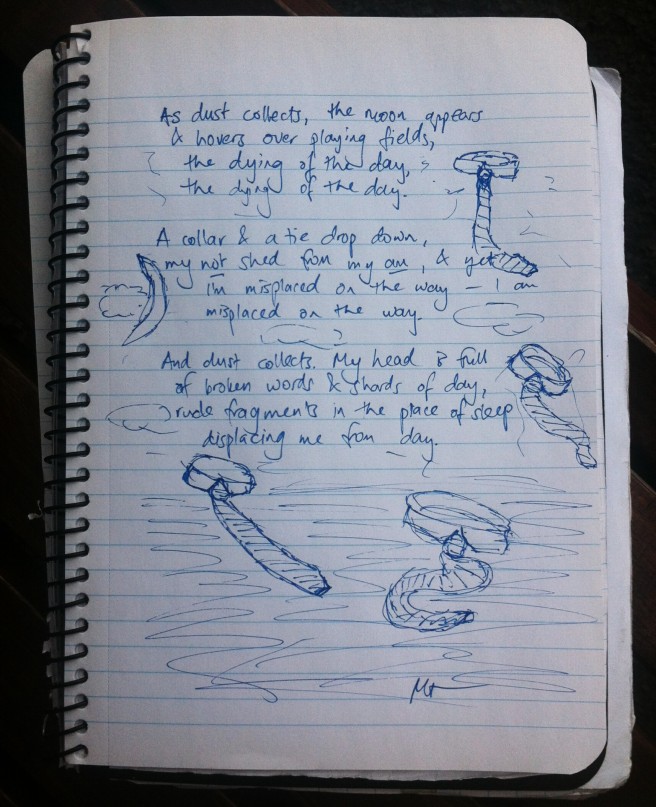 This year, the people behind Movember are having a particular focus on men’s mental health, a topic close to my heart. So, while I won’t be shaving off my beard to grow a new mo from scratch, I have decided to take a handful of my old poems on mental illness and give one of them a visual reinvention for each week of November. Here’s the first, a poem I wrote back in early 2013 at one of my darker times. May we all find different ways of shining light into an all-too-common darkness.