As an Anglican myself, I have to say that our literary exports don’t get much better than Christina Rossetti. Granted, she’s in formidable company, alongside George Herbert, John Donne, William Cowper, C.S. Lewis, T.S. Eliot and R.S. Thomas (why did you need to have the middle initial S in order to be a successful 20th-century Anglican poet?). Yet Rossetti is special for a bunch of reasons. She stands to this day as one of the most important female writers of her day – no small claim when you think of some of the writers she shared an era with – and has a remarkable balance of spiritual richness and honest as well as transcendental exploration of life that makes her successful not just as a writer of faith but also as a poet. She endured much in her life and produced poetry of only increasing beauty through that life, growing both in honesty and grace as a writer. It’s fitting, therefore, that she has a day in the Church of England calendar in her memory. It isn’t celebrated in the Anglican Church of Australia, but I can’t let a minor feast day for a beloved writer go by without writing something to honour it. So here is a poem in memory of an amazing woman, Anglican and poet.

The Language of Flowers

There it was,
in your garden, amidst 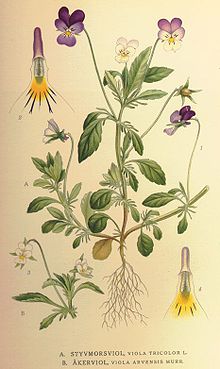 bleeding cyclamen, besides
burdened burdock and a trampled
patch of furze and hyacinth.

Ivy was torn
where you cut through the garden;
juniper drooped and lilac sank.
Yet, then you spied the valley lily
growing where it should not grow,
and a shock of eglantine.

Soft, you thought:
“I planted cyclamen to say,
I must wait. I gathered
burdock with its spines to say,
This is done. So go away.
I am done with artifice;
clematis I will rip from soil.
With dogwood, I am durable.
I cannot plant much else.”

Yet there it stood,
unplanted, unthought. When you went
to pluck a thorn to pierce
a puffed-up dream, you found instead
in varied purple-yellow-white
the heartsease for your sleep, and found
a day-bloom burst from night.

You had ripped
your palace down. There was no place
to lay your head but grass and weed.
Yet on that bed of purple light,
you dropped to rest your heart.

One thought on “The Language of Flowers: For Christina Rossetti”