Last week I posted a poem in honour of Christina Rossetti, who I declared one of the Anglican church’s greatest literary exports. Today, in this week’s uncovering, I want to share with you the work of a widely forgotten gem, the Anglican poet Ruth Pitter. I have my friend Nathanael to thank for this discovery, a poet who is sometimes known as “the woman who should have married C.S. Lewis” (and who is widely recognised as a better poet than he ever was). She was also the first woman to receive the Queen’s Gold Medal for Poetry, alongside winning a number of other prestigious awards. And yet few have heard of her today. In fact, I only discovered her because my friend printed out some articles on her for me – and I’m very glad he did.

Pitter is not, perhaps, the sort of poet who will win many fans easily this century. Her verse is determinedly traditional. Her first book of poems (just called First Poems) has more references to fairies than are wholly to my liking (though she means it in the Tolkien or Neil Gaiman sense, not in the vein of Tinkerbell). But most of all, she is hard to get into today because her work is largely unavailable. You have to be willing to do a fair amount of your own work to discover her, and what incentive do you have if you’ve never heard of her?

Well, the purpose of this post is simply to make some of her work a little more readily available to those who are interested. Because, apart from the obstacles in our 21st-century way, Pitter deserves our attention. Her work is delicate, in a way that is both beautiful and illusive. It refuses to be pinned down, yet it is filled so often with a clearly sacramental imagination. For Pitter, the world is fleeting but points to lasting things. Darkness hurts yet is transfigured by day. Relationships are imperfect yet transfixed by irreducible grace.

One of the best clues to Pitter’s work for me came from this interview, in which she distinguishes between two types of obscurity: the “noble” obscurity in which the poem illuminates something unseen or unknown, and the “slovenly” obscurity that detracts from meaning without adding to it. Pitter’s best work feels like crystal-clear water, of a kind that perfectly allows us to see the rich complexities of the rivers’ floor beneath.

Here are just a few snippets of her work. I’ll let them speak for themselves. 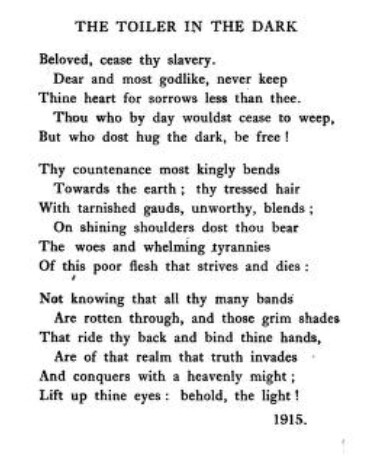 And to finish, here is one of her most joy-filled offerings that I’ve found.
The Plain Facts

See what a charming smile I bring,
Which no one can resist;
For I have found a wondrous thing –
The Fact that I exist.

And I have found another, which
I now proceed to tell.
The world is so sublimely rich
That you exist as well.

Fact One is lovely, so is Two,
But O the best is Three:
The Fact that I can smile at you,
And you can smile at me.