The Messiah came one day, tattered in Adam’s rags,
ragged and anxious from the moment of sin,
sick nearly to death.

I said, My father has betrayed you
and I have chased dead beauty.
Sit ragged with me by my hearth.

I too wear scars: do you know them?
These the contours that choice has worn
and the schisms of my youth.

Sit, Christ said, eternally. My hands have scars to hold.
Come, throw past curses into iceworn fields;
now is the moment of eternal breath.

In my last steps of dream, I am running,
carefully conscious of each footstep,
prayers in sync with my hesitant freedom.
Steps unfold as sun gathers mind up;
day summons up the light to enter, to command.
Yet first the halfway time, the thought
that what the day holds in its hands can hurt
more than night, more than the half-death
of sleep. Prayer holds; dream’s footsteps linger
and patter the day into being. Rise:
the night has not crushed, the sun will not harm.
Unknowing morning beckons. 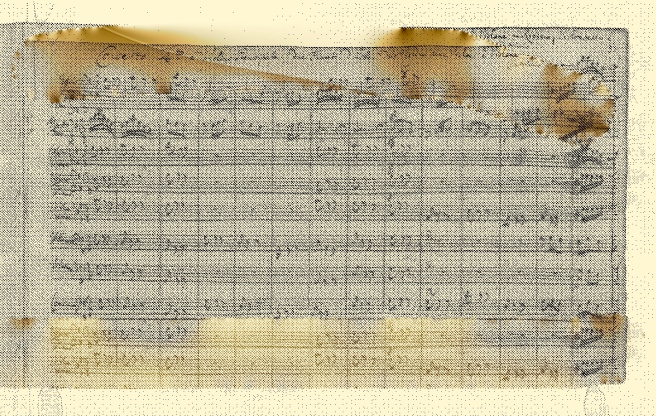 Bach’s ‘Cello Suites are for me the supreme example of contemplation in music. They don’t deal with the emotions very much, there is nothing spectacular but just a single line unfolding itself. And I always see it as a kind of silver line in the middle of darkness…

As a child, I adored Bach’s Brandenburg Concerti, especially No.4. Today’s poem, prompted by Rowan Williams’ poetic tribute to Bach’s Cello suites, takes that magnificent and rich piece as its inspiration – as well as its composer, for whom music existed “for giving honour to God and for the permissible delight of the soul”.

Concerto No.4 (After “Bach for the Cello”)
Polyphony dances the three-in-one’s consummate joy.
Staves undulate, conflicting as the cantor
gathers multiples together.
Where strings’ thrum and wood’s wind intersect,
there the rejoicing ordinary is captured,
beneath manifold sound:
Mourning and marriage run deep together;
necessity, glory, a prince’s pleasure,
all find common, circling breath,
interweaving soft as light,
The soul’s delight.
Bach for the Cello – Rowan Williams
By mathematics we shall come to heaven.
This page the door of God’s academy
for the geometer.
Where the pale lines involve a continent,
transcribe the countryside of formal light,
kindle with friction.
Passion will scorch deep in these sharp canals:
under the level moon, desire runs fast,
the flesh aches on its string,
without consummation,
Without loss.

(From The Poems of Rowan Williams, Grand Rapids: Wm Eerdmans, 2002)

Well, it’s high time that I got down to sharing with you some of the quite extraordinary poetry of former Archbishop of Canterbury, Rowan Williams. When Williams became Archbishop, many were unsure of his theology or what he stood for in his faith. Yet read his poetry and you see that, at heart, he is a poet: both a blessing and a curse, because poetry is full of nuance and complexity, something which can both aid and challenge our understanding of orthodox faith.

Today’s poem is based on Williams’ poem “Great Sabbath” (not readily available online, sadly, but you can view it here courtesy of Google Books). One of Williams’ gifts as a poet is his use of camouflage: the way that both his poetic form and the Biblical truths in his poetry creep up on you unexpected. So, to let my poem and his speak for themselves, I will say no more.

Now I tell you (After “Great Sabbath”)

Once before, they’d gathered by a peak
While gnats and flies buzzed around sore ears
And sun beat down on dull heads. It was a time
When mountain peaks had seemed too tall to climb
And law, they’d reasoned, must come to meet them here.
Yet law, tenacious, raised its voice to speak

In volumes which could never be ignored.
Higher than their ears could reach, it had come
Down to their dark, while scent of melted gold
And stink of drink and hot revelry turned cold
Lingered with them, and the righteous sun
Had blasted into every hidden store.

Today, the day at zenith, the sun burst
Across the bright-lit ridge where he stood.
Ears itched to hear his new-fangled thoughts:
Would he teach them a battle-cry? Sharp retorts
To put tyrants and bullies in their place for good?
The air rustled, scalps burned, and at first

They thought they heard familiar strains of songs
Taught at bedsides by mothers, aunts: that word,
Blessed, a promise of no-one begging bread
And lands overflowing. (Milk and honey, they’d said.)
Today was dry; heat ate up much of what they heard.
Yet here and there a shock: cheeks turned toward wrongs,

The extra mile walked, the second tunic given.
Here, Simeon knew Eli still had his shirt
And Eli frowned when Enoch passed him by.
Hearts had excuses, but still the same reply:
A hand which rose to take in every hurt,
A back which gladly let itself be riven.

What, then, was blessing? A code? Sheer wordplay?
Some scratched their heads, others left for softer fare;
Some stayed, ears prickly, consciences seared.
Yet something of sheepish hope also appeared,
And as he paused, his lips a constant prayer,
He burnt their hearts with all his brightest day.